5G is expected to be capable of delivering extremely fast data with estimates between 10 – 50 Gbit/s compared with today’s average 4G download speed of 15 Mbit/s. In fact, back in 2013 Samsung tested 5G at 1Gbps and journalists reported that a HD movie could be downloaded in less than 30 seconds. In 2014, Samsung set a mobile speed record of 7.5Gb/s in another 5G trail, while estimates predict the speed will reach 10Gb/s, with transfer rates as high as 800Gb/s further down the line, taking your download time of a full length film to around a second!

“We are determined to be one of the first countries in the world to use 5G. In these very early stages we want all ideas, from all parts of the country, that will help us get the technology and the roll-out right to have a nationwide network of 5G innovators.” – Matt Hancock, Minister for Digital

Fast track to 2017 and the government is hoping that the UK will be ‘at the forefront of 5G’, with a new competition ‘5G Testbeds and Trials’. The competition aim is to encourage the development of a UK ‘5G ecosystem’ with technology and deployment, testbeds and trials to stimulate the development of 5G use cases and business models. Applicants will have the chance to win grant funding of between £2 million and £5 million, out of the £25 million total budget.

“ The Programme is designed to help address some of society’s biggest challenges, such as those faced in health and social care, focusing on areas where the Government’s role can have the most impact. ” – Matt Hancock, Minister for Digital

Two groups of organisations will make use of Testbeds: connectivity providers and their supply chains; and industry and public sectors that could uncover new ways of working with 5G capabilities. Here are some examples: 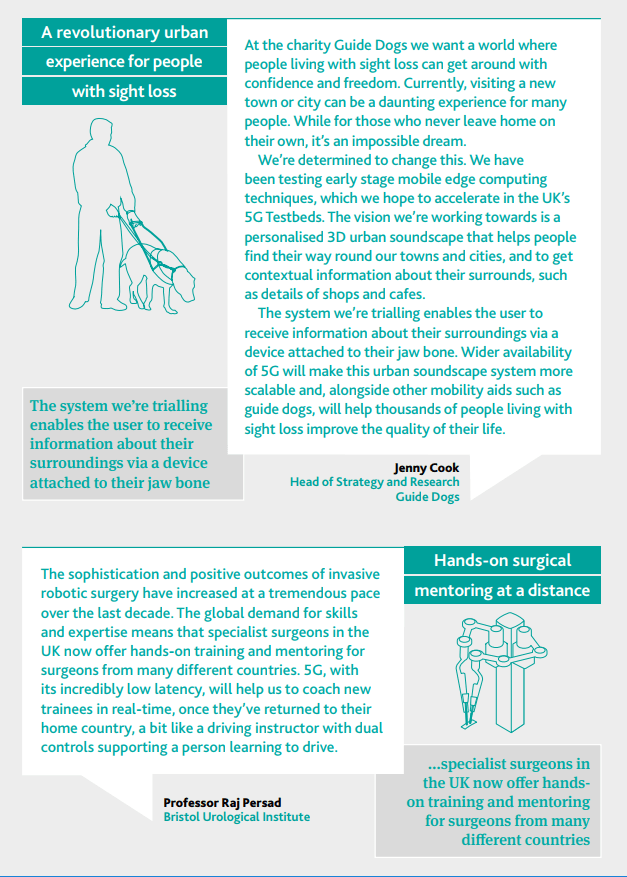 The competition opened on October 23rd 2017, and will close registration on December 6th 2017.