Google has released the new Pixel 3a and 3a XL available in Black, White and Purple-ish (Google's term!). The new devices offer an affordable price tag and carry the benefits of the latest Android operating system - Android 9 Pie, detailed below. The devices feature a scratch-resistant poly-carbonate shielding housing the Sony IMX 12MP camera, alongside Pixel Imprint - the fingerprint sensor that becomes faster and more accurate over time. Somewhat disappointingly, the new devices are not equipped with wireless charging, however, the cameras are widely considered the best in the market, offering a vast array of features.

The rear camera sports an f/1.8 aperture, 76-degree field of view, auto focus with dual phase detection, a spectral sensor to improve in colour accuracy, a flicker sensor to reduce banding in low light, and finally, optical image stabilisation. In order to take advantage, in-built features include Top Shot - that takes into account smiles, open eyes and more in order to utilise Al to pick the best frame.

The renowned HDR+ mode on the other hand, captures a series of photos at varying exposures and generates a composite image to ensure that details and highlights aren’t lost during post-processing. Perhaps most notably, Google Lens works in real time to detect objects and more 'in-frame', for instance, it can automatically extract phone numbers, dates, and addresses from business cards and add them to your contacts list.

Google’s latest version of Android 9.0 or ‘Pie’ is currently available on the latest Google Pixel smartphones inclusive of the Pixel 3a and 3a XL. From minor changes such as moving the time to the top left of the status bar to larger improvements in battery life, Android Pie brings a variety of improvements. 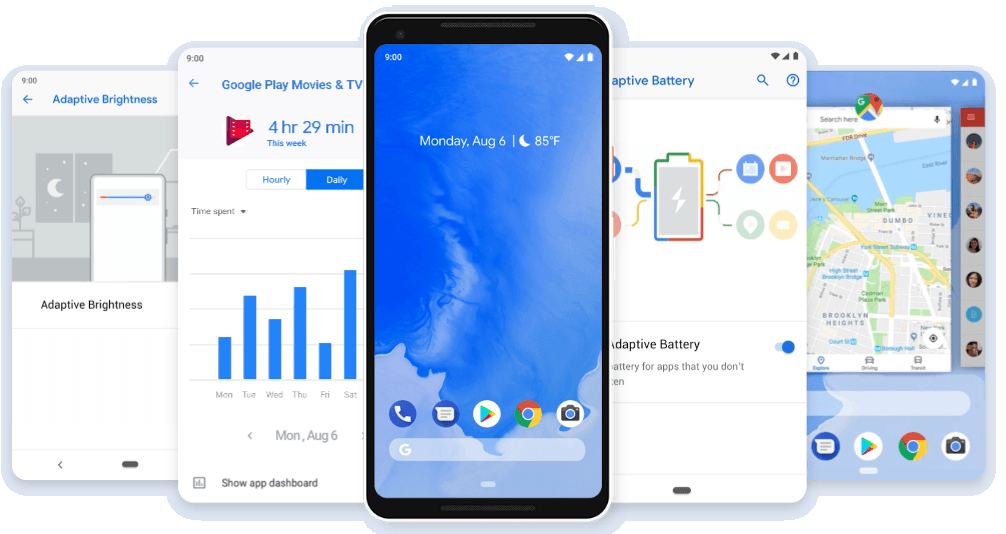 The home button now takes a pill-shape and moves in the same space as the traditional on-screen buttons. Tap it to go home, flick it up to see recently used apps, swipe upwards twice or pull it up further to get to the app drawer, or hold down to activate Google Assistant. You can also drag it to the right to switch to the last app (similar to the double tap of the overview button) or drag and hold to cycle through recently used apps. The back button still appears when needed, but the overview button has gone. The gestures are not activated by default for now, which means to try them out head to Settings > System > Gestures and toggle the “Swipe up on Home button” option.

Adaptive Battery learns your usage patterns and directs the power to only the apps you need at the time you need them for more predictable day-to-day battery life. Using the new battery feature, user’s on the beta programme found an increase in battery life in the region of 20%.

Smart replies will now be incorporated in more apps than Gmail and Smart Reply, allowing you to easily send one-button replies.

App actions works to predict not only the app that you want at any particular moment, but an action from within that app too. For example, if you regularly check the weather in the morning, weather will appear when you wake as a suggestion for one-tap access.

Apps you have given permission to access your location, microphone, camera and network status will no longer be able to access them when idle in the background. This means it will be harder for rogue apps to spy without your knowledge and consequently better protect your privacy.

For more information on the Pixel 3a and 3a XL please do not hesitate to get in touch with your account manager via email sales@cmmtelecoms.co.uk or phone 01252 854352.  We are always more than happy to help!