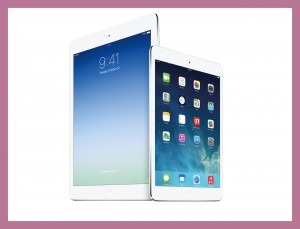 The Apple Autumn Launch Event took place in San Francisco just yesterday. It was here that Apple announced the release of it’s new iPad and iPad Mini. But it wasn’t just an ‘iPad’ released. Apple was so pleased with it’s creation, described by Phill Schiller, Apple’s vice president, as the “biggest leap forward ever in a full sized iPad” that they gave it a new title – iPad Air.

The iPad Air Design
iPad Air is the thinnest and lightest iPad yet. The previous iPad weighed in at 1.4 pounds, the iPad Air however is just 1 pound – about the same weight of three medium sized bananas.The bezel (the white edging) is 43% smaller than the the previous iPad. Allowing for a thinner border to really show off the 9.7″ retina display. As colour goes, the iPad Air will be available in white/silver and black/space gray, so we won’t be seeing a gold iPad just yet. 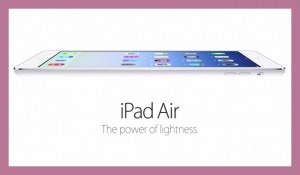 Features
The iPad Air features the upgraded A7 Chip as seen in the iPhone 5S, allowing the iPad Air access to the 64-bit architecture of the chip which will improve gaming graphics. iPad Air will also feature a 5-megapixel rear iSight camera and a next generation FaceTime HD camera with improved backside illumination for better low-light performance.

Price, and Sale Date
Starting at £399, the iPad Air will go on sale from November 1st. 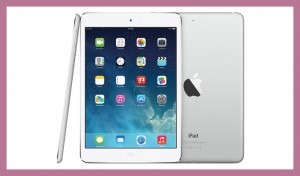 iPad Mini Overview
Now for the iPad Mini. The new iPad Mini sports a 7.9″ retina display offering 2048 x 1536 pixels. The iPad Mini has the upgraded A7 chip with 64-bit architecture and is 4 x faster in CPU tasks and 8 x times faster in graphic tasks. And you can enjoy these features all day long thanks to the 10 hour battery life. The iPad Mini will be available in Apple’s new white (silver) and new black (space grey). Starting at £319 in the UK. The iPad Mini will be available in November although a precise date is not clear yet. Although big improvements have been made in the processors and screen quality, we can’t help but be disappointed with our expectations for Touch ID…