Samsung’s new devices, the Galaxy S7 and Galaxy S7 Edge are now on sale in the UK, while rumour has it – the S7 Active may be coming soon too. Samsung says the new phones are ‘created for today’s mobile lifestyle’.

Upgrades from the previous S6 include water and dust resistance, allowing you to immerse your new Samsung device in 1.5 metres of water for up to 30 minutes. And with the inside components sealed off, your micro USB ports and earphone jacks will be kept open so you won’t have to fiddle with extra caps or covers.

The new models also feature an expandable storage card slot that can take up to 200GB Micro-SD cards, a feature unavailable in the previous S6 and S6 Edge that could only hold a maximum of 128GB internally. 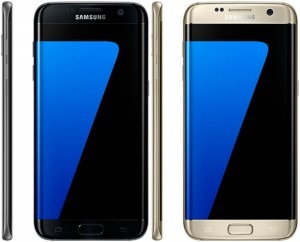 The S7 and S7 Edge have very similar specs, however the screen holds the key difference. While the regular handset has a 5.1″ SuperAMOLED screen with a Quad HD resolution, the Edge has a larger 5.5″ Quad HD screen. Samsung has also updated the display on both models so that it will always be on for you to check the time, date and notifications easily. To avoid draining your battery, the screen will switch itself off at night and while in your pocket.

A further difference between the two flagship devices, is the difference in battery size, with the S7 featuring a 3000mAh battery, and the Edge featuring a 3600mAh battery. However, both device batteries feature fast charging, allowing you to gain 60% of battery life from just 30 minutes of charging!