It was expected that Samsung would release it’s next flagship smartphone in line – the S8, at this year’s mobile congress, instead they unveiled their new Galaxy Tab S3, with all new features.

The S3 carries a similar design to it’s predecessor, the S2, with rounded corners, a metal frame and a fingerprint sensor placed within the home button on the front of the device. However, for the first time, Samsung’s tablet features a glass back. Although the durability may be questionable, it’s safe to say the new glossy, glass body does offer a far more premium look compared to it’s previous tablets. When it comes to viewing, the Tab S3 sports a 9.7″ QXGA sAMOLED display for a notably bright experience, not to mention the HDR video playback capabilities. Further new features include USB Type-C offering far more power, a keyboard port for Samsung’s new keyboard, S Pen functionality (with an S pen included) and quad-stero speakers tuned by AKG by Harman. 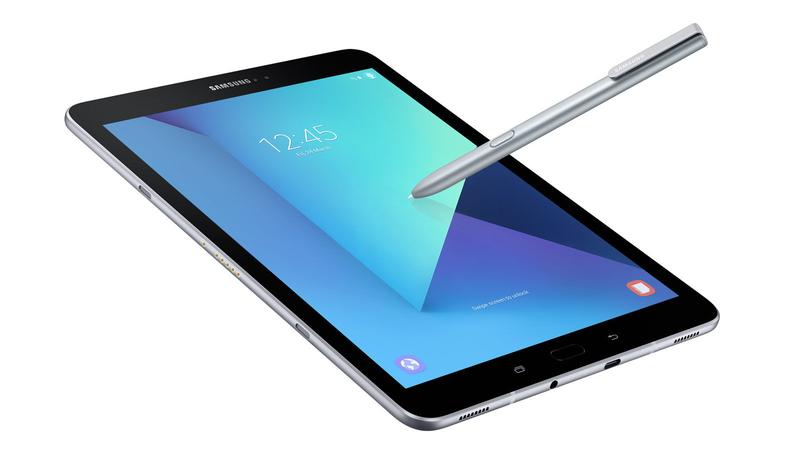 The appearance of an S Pen Stylus that have previously featured in Samsung’s Note series phablets is definitely a bonus for Galaxy Tab users. And better yet, the S pen has been given a re-design, with the need for recharging removed and the tip narrowed to 0.7mm for clearer, more natural handwriting. You’ll be able to use the stylus with Galaxy Notes, PEN.UP or even for composing in Samsung’s Soundcamp.

Samsung has introduced a dedicated keyboard for the Tab S3 that can be plugged directly into the tablet for quick connectivity. The keyboard layout is designed specifically to optimise easy typing and reduce typos.  However, unlike the S Pen, the keyboards are sold separately.

Samsung has collaborated with AKG’s sound engineers, the Australian manufacturer of microphones, headphones and wireless audio systems, to provide crisp and clear sound, that comes from each corner of the screen. So whether you’re holding the S3 vertically or horizontally, the sound will not be compromised.

Finally, Samsung’s new S3 features Samsung Flow that allows you to sent content from your phone to the tab S3. Offering you the ability to keep track of your mobile notifications without picking up your phone and to view your content on the larger 9.7″ display.  While Samsung Cloud offers 15GB of free storage.